Awards for Excellence in Design and Execution

The Awards for Excellence are annual awards that recognize excellence in the design and execution of a building that incorporates the use of architectural glass and metal. One award will be presented in each category (DESIGN and EXECUTION).

The awards competition opens in January of each year (pandemic years excepted). Any member of the OGMA in good standing may submit as many nominations as they wish. Projects nominated will be reviewed by our volunteer panel of judges.

Any member of the OGMA in good standing may submit as many nominations as they wish. Projects nominated will be reviewed by a panel of judges consisting of one OGMA Director and two practicing architects.

Submissions for nominations must include a minimum of 10 photographs of the nominated project and a comprehensive description of between 200 and 500 words. Submissions should be sent in digital format, accompanied by high resolution, print-quality photos.

Criteria for the awards:

Nominations will be judged equally upon:

Deadline for receipt of submissions is March 31, 2023.

The architectural firm and glazing contractor selected to receive an award will be notified on April 12, 2023.

The awards will be presented at the Top Glass Conference in Mississauga, Ontario on April 19, 2023. Award recipients are encouraged to attend the show to receive their award and to present the highlights of the winning nominations to show attendees.

Winner of the 2019 Award for Excellence in Design: 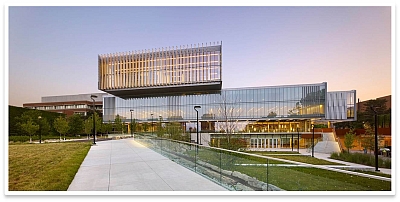 Feedback from the judges: The limited but tasteful application of large vertical wood shade fins juxtaposed against elegant, yet simple expanses of aluminum curtain wall and metal panelling combines to create a visually pleasing and memorable composition. Without question, the very controlled application of the wood injects significant warmth and unique character to the design while serving the very practical function of solar shading.

Winner of the 2019 Award for Excellence in Execution: 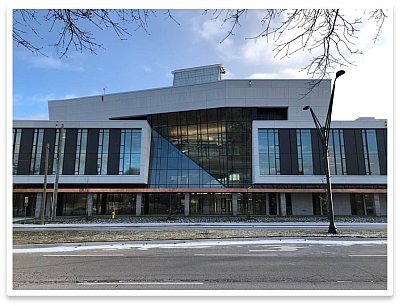 Feedback from the judges: The creation of a “Hybrid Passive/Active Environmental Control System” utilizing the entire exterior glazing systems of the building actively demonstrates how glazing design can reach beyond aesthetics and the typical association of low thermal performance to become an integral and necessary component in reducing the carbon footprint of a building. The overall effect of the system’s natural ventilation of the building is firmly a contributor in the contemporary drive towards Green working spaces – the way of the future of energy efficient building design.

Winner of the 2018 Award for Excellence in Design:

Feedback from the judges: The simplicity and elegance of this project belies the fact that no one individual component is used in a non-conventional manner. Nonetheless, the beauty of the composition lies in the sensitive application of these components – the clear glazing, aluminum rod screen and structural steel frame – to create a harmonious, inviting and multi-layered play between interior and exterior.

Winner of the 2018 Award for Excellence in Execution:

Feedback from the judges: The technical complexity of this design takes the often understated element of the curtain wall trim cap and makes it the major component of the visual identity of the building. Each vertical fin is a unique micro-design that, together with its neighbours, juxtaposes against the more conventional glazing of the composition to create a very dynamic and memorable façade.

Winner of the 2017 Award for Excellence in Design:

Feedback from the judges: Notwithstanding the impressive cantilevers, the elegant yet somewhat conservative exterior belies an impressive courtyard interior whose character is defined by an awe-inspiring curvilinear skylight. The transparency of the projecting glass-clad bays within the courtyard, juxtaposed against wood-slat clad walls, create visual nodes of activity and interest within the warm yet modern multi-storey space.

Winner of the 2017 Award for Excellence in Execution:

Feedback from the judges: The curvilinear form of the building’s plan coupled with the vertical cant in two axis of the curtainwall system requires significant design detailing and coordination, and generates construction challenges which are all successfully met. This building is a dynamic and excellent example of the application of standard curtainwall technology to create a very visually distinct façade.

Winner of the 2016 Award for Excellence in Design:

Perkins+Will for its work on Mohawk College’s David Braley Athletic and Recreation Centre in Hamilton, Ontario

Winner of the 2016 Award for Excellence in Execution:

TAGG Industries for its work on Google’s Canadian headquarters in Kitchener, Ontario